It's Official... I am a Business

It has been a busy few days....
I have finally made progress on turning this passion for photography and art of mine into a business. The required forms have been filed with the county, a bank account has been set up, and wait for it..... I setup an online gallery and store for selling my photographs.
You can access the gallery at artisticbalance.zenfolio.com
Please take a look at the gallery and let me know what you think. I currently have collections from Italy, Skylands and my InfraRed photography online. I will be adding more collections over the coming weeks and months. If there is something you would like to see there right away please let me know and I will get to work on it.
Thank you to all of you who have encouraged me to pursue this and take it to the next level.
As a grand opening special I am offering a 10 percent off coupon on all purchases before April 1st, 2011. To use the coupon simply enter the coupon code 10prcnt in the coupon code box when checking out.
Keep Makin' Art!
Carl
Posted by Carl at 3:53 PM 9 comments: 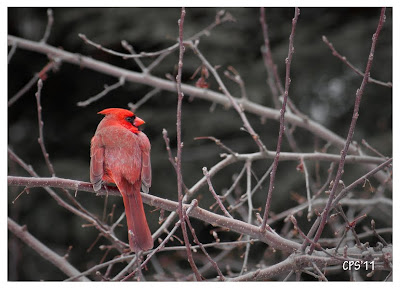 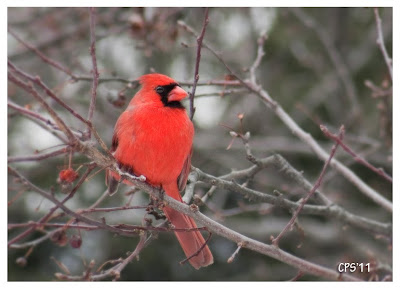 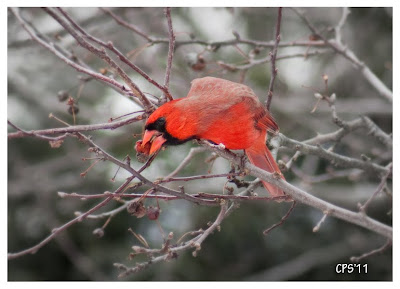 Mr. Cardinal Makes another visit to my yard! I look for him any day I am working on the computer... I can plan on a couple of visits... at least until all the berries are off that tree anyway.
Keep Makin' Art
Carl
Posted by Carl at 2:52 PM 7 comments: 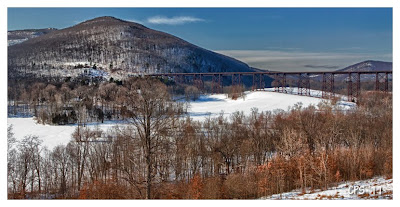 I revisited a favorite spot... The Trestle Bridge at Moodna Viaduct in Cornwall, NY. An interesting side note. My high school photo teacher had seen so many pictures of this scene he warned us on day one of class handing in a photo of the trestle was an automatic 'F'. Thanks Mr Mahar. I have been photographing the trestle ever since.
Keep Makin' Art!
Carl
Posted by Carl at 11:16 AM 2 comments: 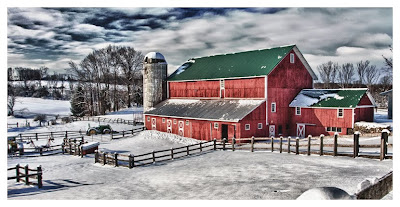 A Few More From the Butterfly Conservatory 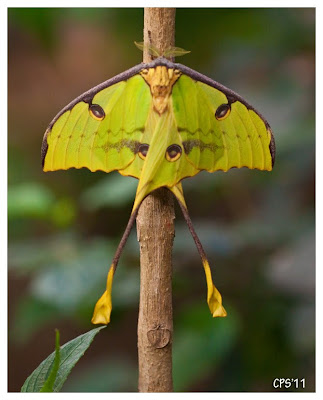 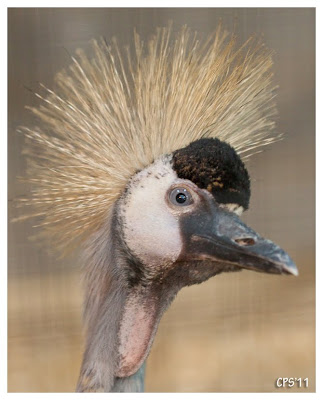 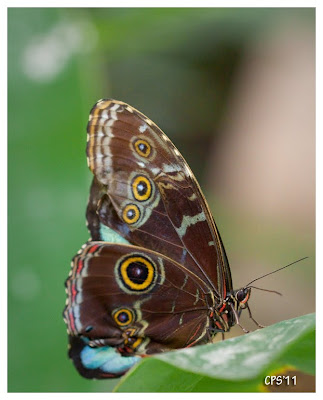 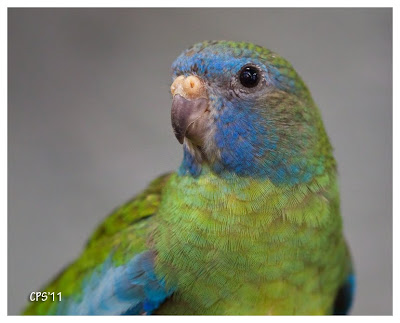 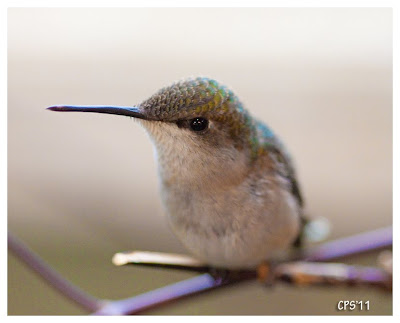 Here a the rest of the images from saturday at the butterfly Conservatory....
Keep Makin Art!
Carl
Posted by Carl at 8:13 AM 4 comments:

A Day at the Butterfly Conservatory 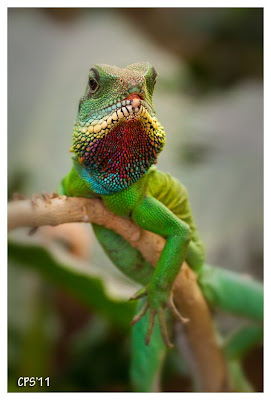 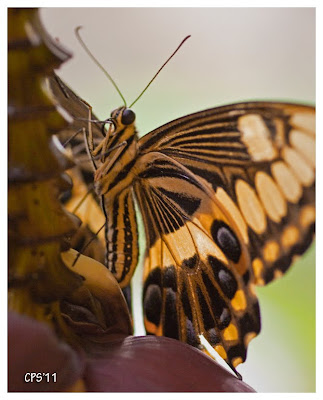 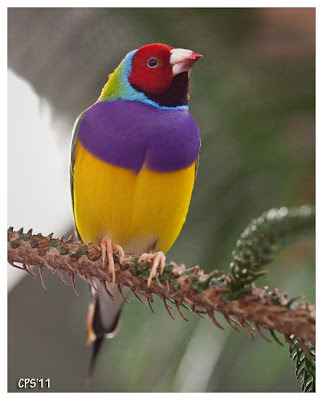 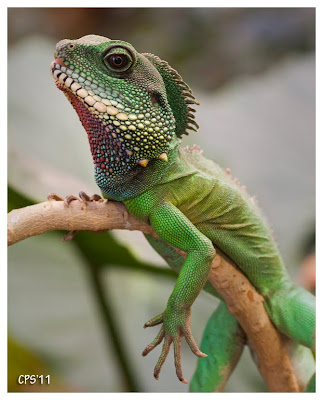 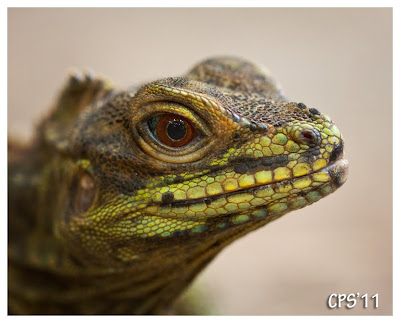 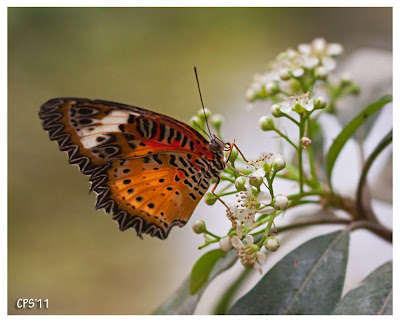 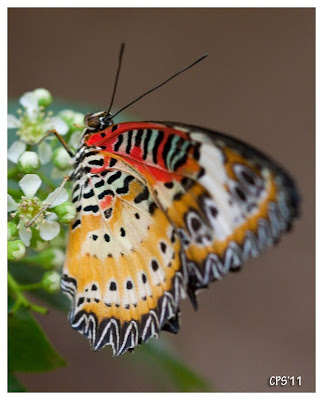 What do I do when I wake up and the temperature has dropped forty degrees overnight and there are fifty mile an hour winds blowing the snow around.... I head to an oasis in upstate NY, the Joseph L. Popp Butterfly Conservatory in Oneonta. It is a sure cure for the winter blahs. My Niece Jessica travelled with me on the long drive through the Catskills, so we could take photos of the birds, reptiles and butterflies on display. It was a perfect way to spend a chilly morning.
Keep Makin' Art!
Carl
Posted by Carl at 12:46 AM 8 comments:

The Cardinal makes another appearance 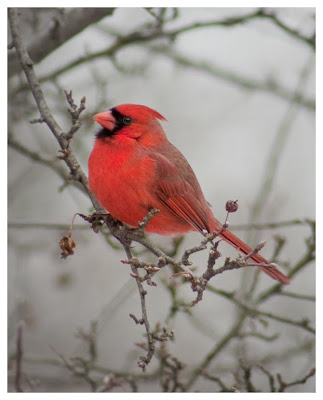 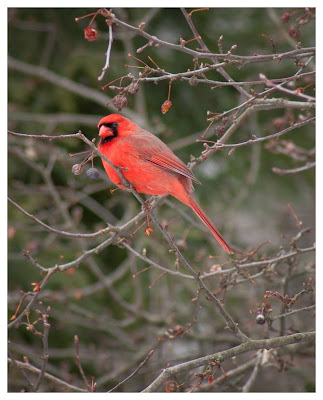 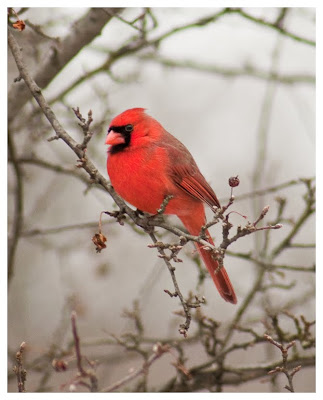 At this point I think I will pick the three best cardinal shots and frame them with three five ny sevens in one mat and frame.
Keep Makin' Art!
Carl
Posted by Carl at 7:00 AM 6 comments: 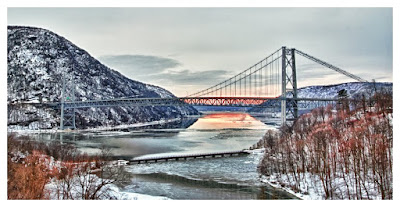 I captured this shot of Bear Mountain Bridge at sunrise in the snow. The snow on the mountains really sets off the bridge nicely. Later today some more of the cardinal. With any luck i will start painting the cardinal today.
Keep Makin' Art!
Carl
Posted by Carl at 10:01 AM 10 comments:

I am not a writer. I prefer to express myself in images rather than words, but a concept hit me last night and I had to write the first paragraph...... Where will this take me? I don't know maybe I will post 'God's Dilemma a Comedy' (working title) one chapter at a time here on this blog or on a seperate blog about the book project.
How should I go about this? What do you think? Anyway it is my idea so I think I will play this out and see where it takes me.
God's Dilemma a Comedy - copyright 2011.
God sat in a Los Angeles hotel room sipping a diet Coke from the minibar. He had a big problem...
God had gone off to sort out what to do about mankind while the plague ravaged Europe eight hundred years ago. He had known for some time that mankind was becoming too technologically advanced and this would quickly lead to trouble. He had no idea it would happen so fast. The idea of free will and and moderate intellect in human beings seemed like such a nifty idea when he created human beings.... It was part of the whole 'in our image' campaign of the times. He had spent the last three weeks getting up to speed on the last eight hundred years. He was amazed at what a teenager with an Ipad could do. He really did marvel at his creation sometimes, but they were also horribly flawed and cruel. It was time for a mid course correction. Should God simply wipe the slate clean again and call earth 1.o anexperiment and use what he learned this time or should he help this race of people to figure out how to fix it for themselves?
He had opted for the later and would right a new book. A 'New' new book actually. this lead to all sorts of questions about how to deliver the content... Could God write a blog? Anybody could do that. Who would believe him? Should he self publish a book? Did he need an agent? Should he make his presence known... That would open the whole can of worms on faith.... Where to start. It was all too much. For now he would work on his tan for a few days and come up with a plan.
Keep Makin' Art
Carl
Posted by Carl at 7:57 AM 7 comments:

The cardinal drops in for another visit. 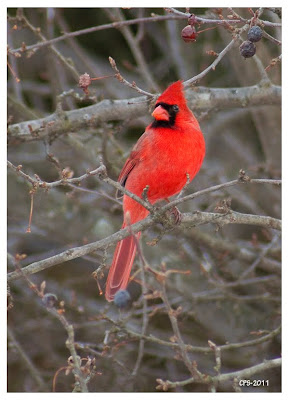 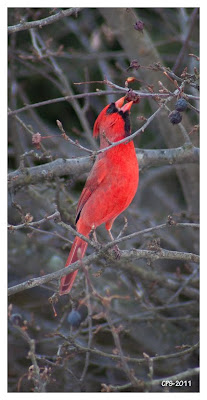 The cardinal stopped in for another visit... and boy was I glad. I had been working on an upgrade for work since Friday afternoon. When I finally knocked off around for the cardinal was back in my front yard posing for me.
So on a weekend when I never expected to get my camera out the photo op came to me...
Keep Makin Art!
Posted by Carl at 7:37 PM 3 comments: 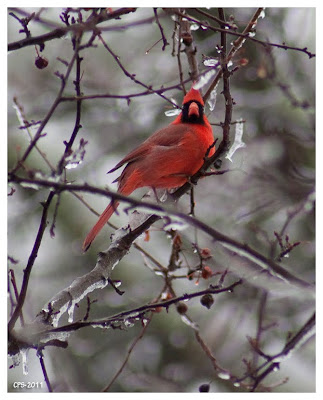 This cardinal was nice enough to pose for me while the ice fell around us. 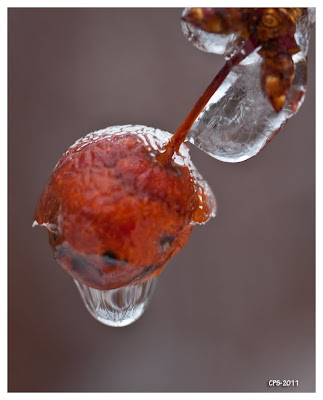 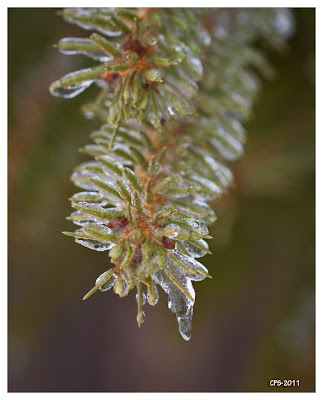 Hi Everyone - I worked from home today due to the ice here in New York. I got a quick break before lunch time and got these photos along my driveway while I tried not to slide back to the house on my butt.
I have not been posting much in the new year, I was side lined with a sinus infection / cold that would not go away. I am just about back in the pink and will be posting more regularly again starting now.
What art projects do you have going on in 2011?
Keep Makin' Art!
Carl
Posted by Carl at 5:46 PM 6 comments:

Enter your email here to subscribe to new posts via email.

Carl
I have been an artist my whole life. From the age of seven when I went to ceramics camp while the other kids in the neighborhood played football, I have known art would be one of the most important things in my life.

Websites of Artists and Galleries